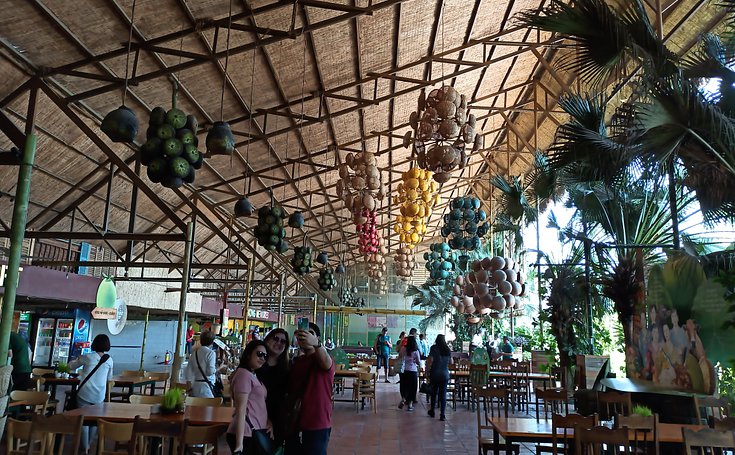 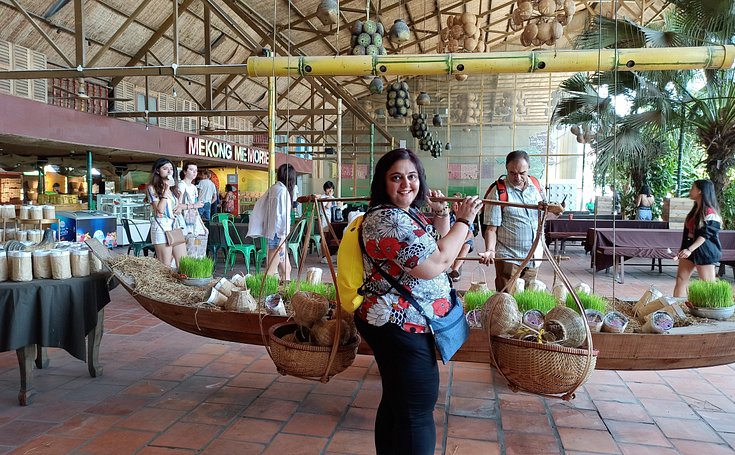 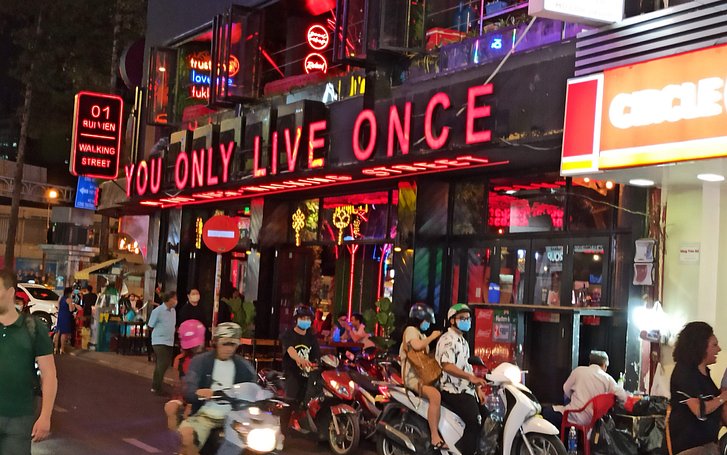 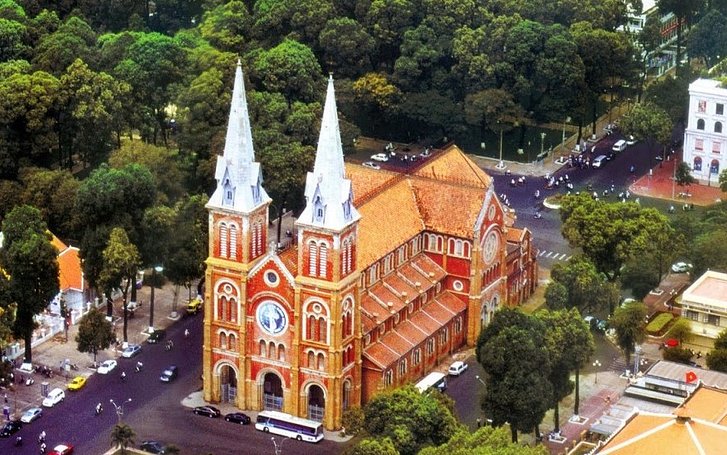 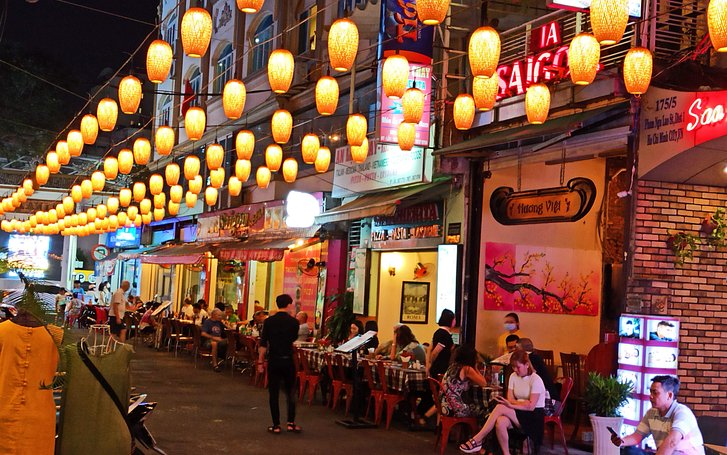 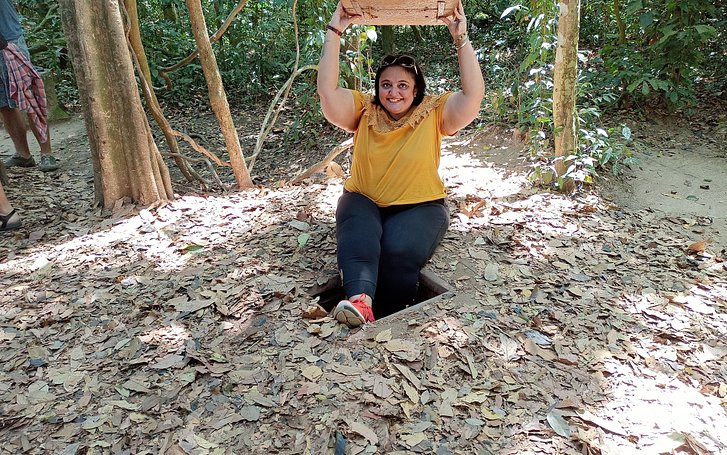 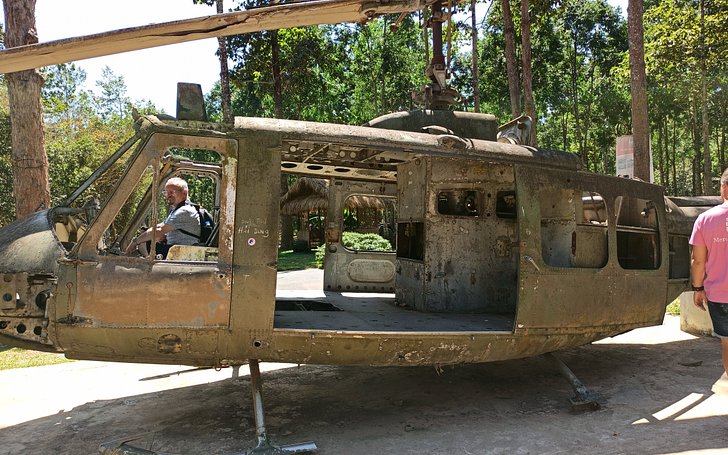 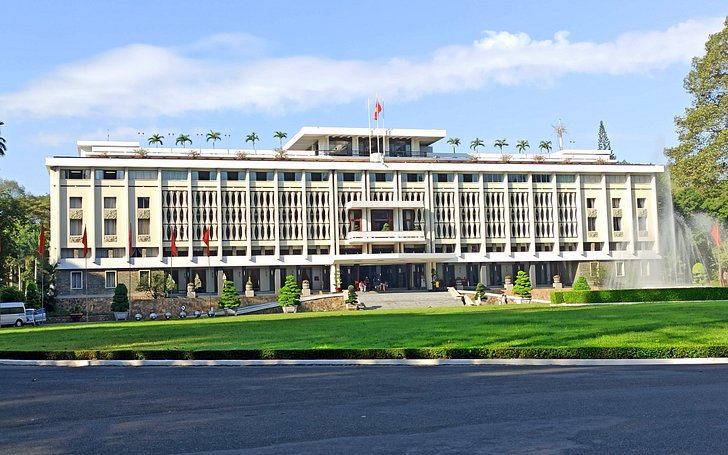 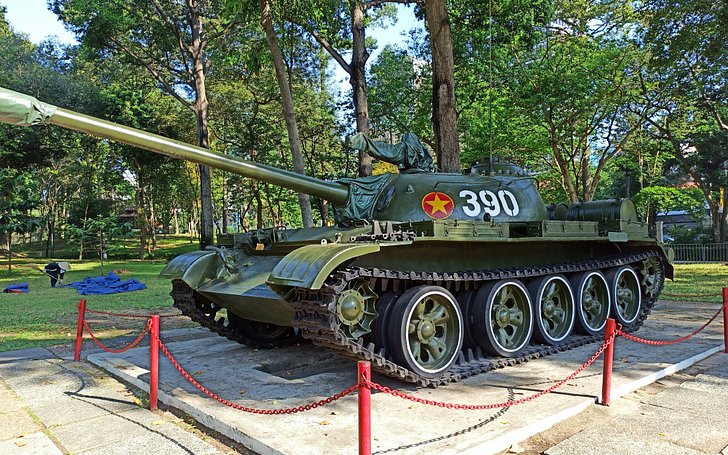 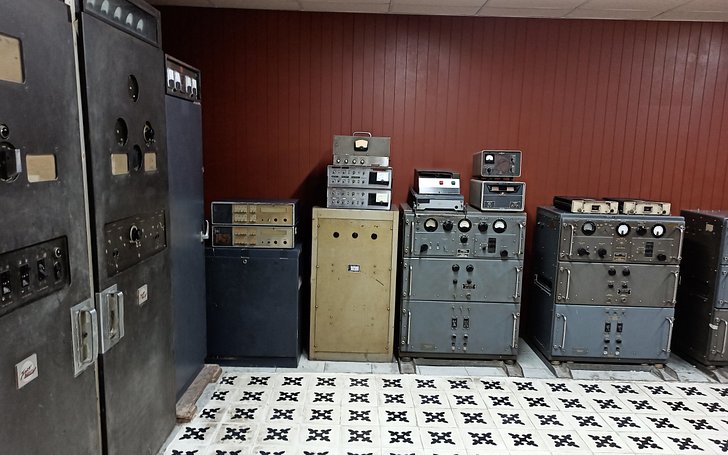 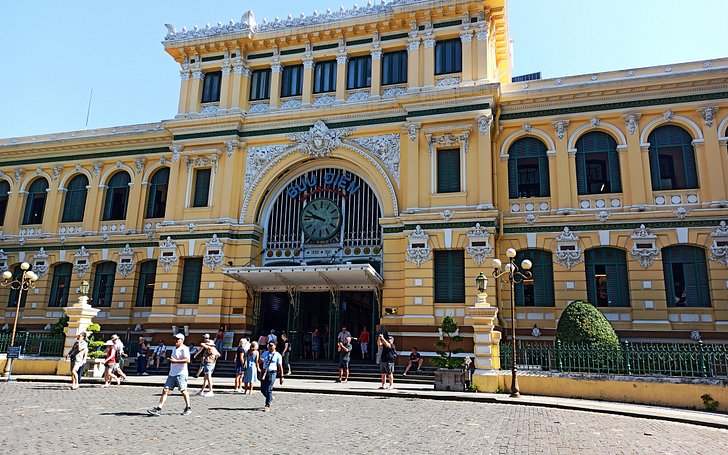 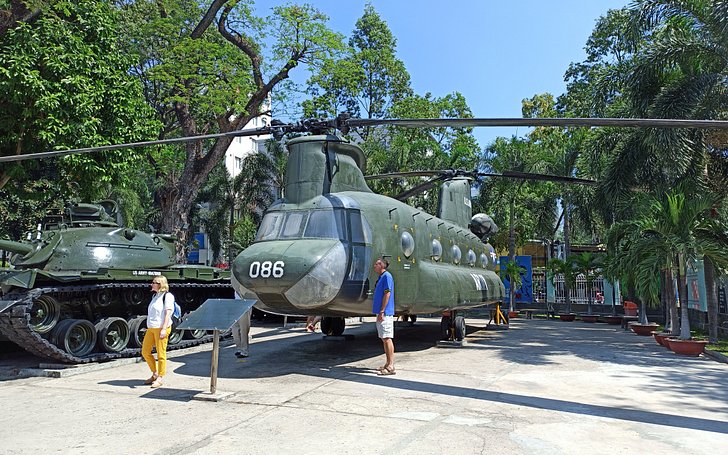 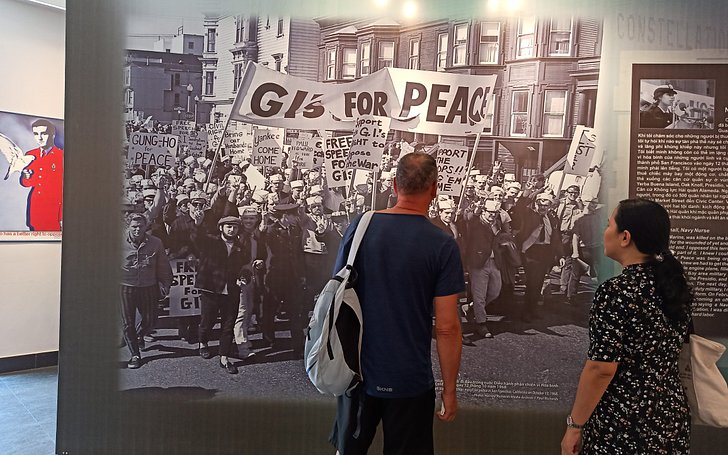 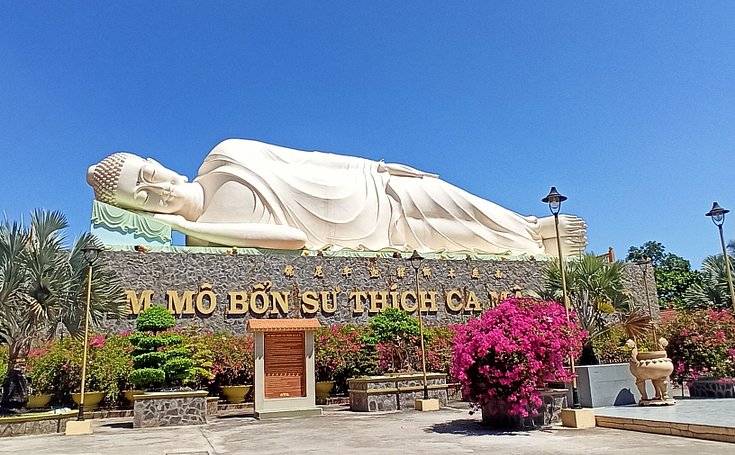 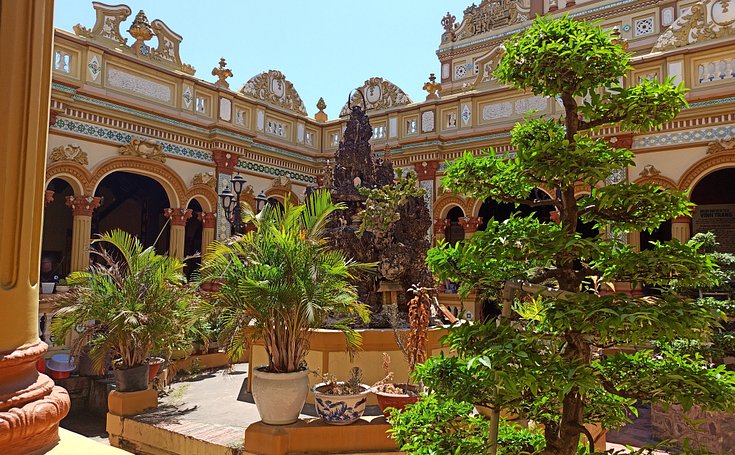 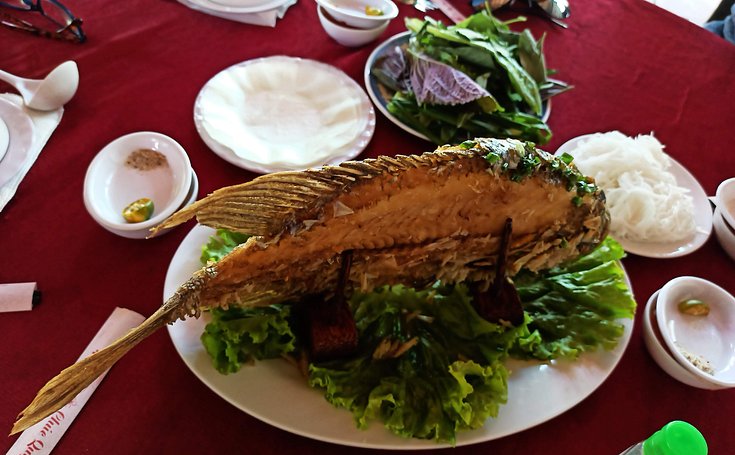 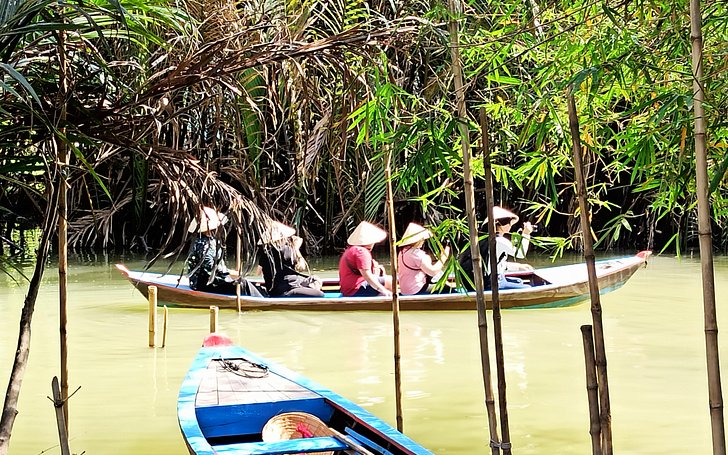 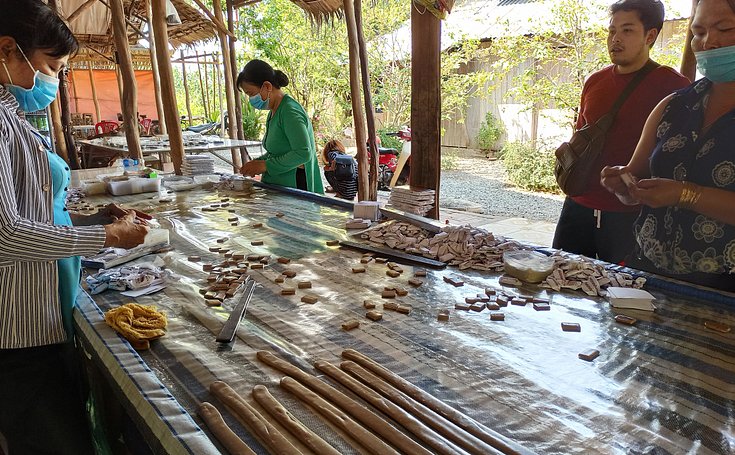 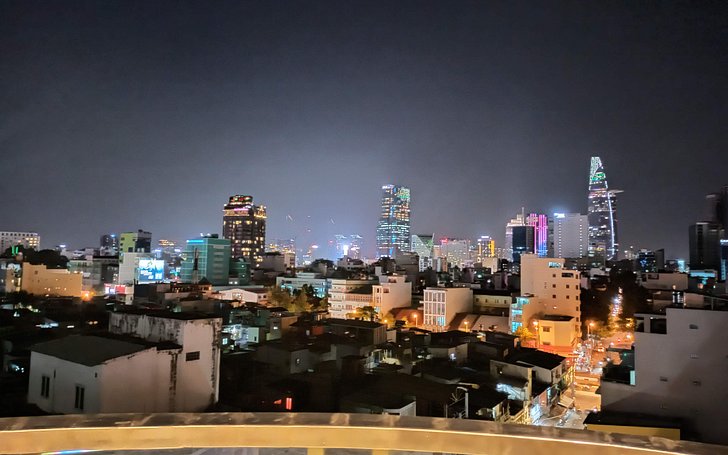 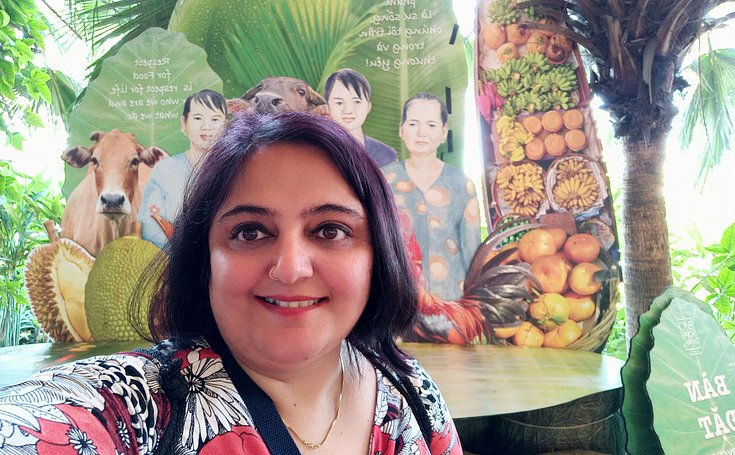 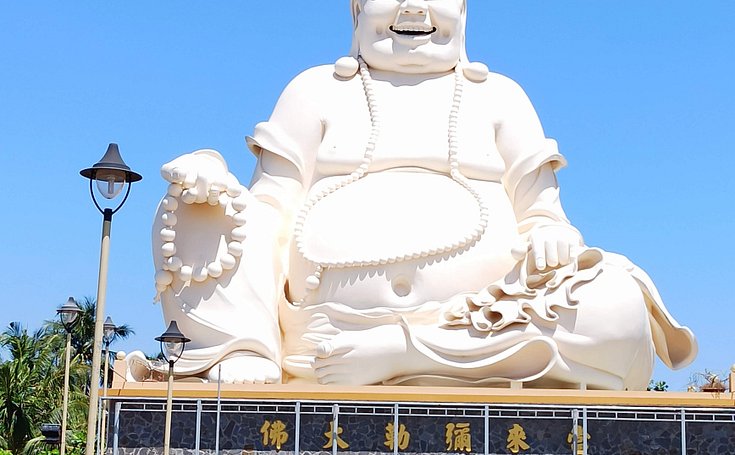 Not to be missed is the famous Chinatown in district 5. Also known as Cholon, its main draw is the Binh Tay Market  has the largest Chinese community in the country with Binh Tay Market as its main draw. Locals are seeing buying their daily food supplies including fresh seafood here.

As the sunsets, Ho Chi Minh city gears up for a very happening and vibrant nightlife! The resturants gets converted into bars, pubs & nightclubs are flooded with locals and tourists both. Food is cheap in Vietnam and so you can have a good night out with a couple of drinks and local food in around 200,000 vietnamese dong (vnd). Thats around Rs. 630 Indian Rupees or $9 USD. The city doesnt sleep and you can party till wee hours of the morning.

After breakfast, depart Ho Chi Minh City, you head out to Cu Chi Tunnels - an elaborate underground network of 250 km of tunnels and chambers below the city.

They were the location of several military campaigns during the war. After an introductory video, viewing various mantraps, the remains of an American tank and numerous bomb craters, you will explore the maze of tunnels to see how the Viet Cong survived in this underground network.

Below my feet in this picture are steps going deep into the tunnel which was around 15 meters long. And the tunnel cover was really heavy!!!

Start your day with a visit to the Pham Ngu Lao Street in District 1, its got a variety of international-style cuisine to stimulat your taste buds. Here you will find shops selling a lot fo souvenirs and budget takeaways that you can pick for your friends and family back home.  you can easily spend couple of hours here exploring the street.

Then visit the famous Saigon Notre Dame Cathedral. It was built in the late 1880s by French colonists and is , is located in Paris Square. Its name Notre Dame was given after the installation of the statue ‘Peaceful Notre Dame’ in 1959. Though vietnamese are mostly followers of buddhism, this church is  the biggest representation of catholism in the country.

US choppers and amunition are still preserved in the Cu Chi Tunnels forest that show us a glimpse of the war times.

In the afternoon go for a city tour of Ho Chi Minh City. Thats what I did and it was super!

Visit the Reunification Palace, the home and workplace of the President of South Vietnam during the Vietnam War.

Ho Chi MInh resided here and during the war there was a US tank that broke the wall and entered. That Tank is also stationed in the palace gardens here.

Whats interesting here is the underground bunkers constructed for the safety of the royal family and the senior officers with President Ho Chi Minh. It has a complete  communication system that was used during the warfare for messages and instructions.

Next on our list was the Oldest Post office in Vietnam - The Siagon Post Office. It stabds next to the cathedral, a classic French colonial structure, is still a functioning post office today and features huge ceilings, a giant portrait of Uncle Ho, and many beautiful details.

It also has a huge souvenir market and one can buy dozens of collectables from here. I did my maxium souvenir shopping here!

Ho Chi Minh City (Vietnamese: Thành phố Hồ Chí Minh), also commonly referred to as Saigon, is the largest city of Vietnam. Ho Chi Minh City is a popular tourist destination due to its fascinating culture, classic French architecture, and sleek skyscrapers as well as ornate temples and pagodas. The city is also filled with rooftop bars that overlook Saigon and beyond, while fantastic restaurants offer a combination of French, Chinese, and, of course, local Vietnamese cuisine.

Explore this beautiful country with us! Contact Us Here for curating your desired trip to Vietnam OR see our Sample itinerary below.

Its time to say goodbye to Ho Chi Minh City, till we meet again!

Next, enjoy a rowing boat trip on the small canal, fully covered by the shadow of the water coconut’s trees. The boat takes you through the forest and its a great opportunity to get some pictures in this beautiful surrounding.  This experience was a lot of fun!

After your boat ride, take a bike ride around the island before returning to the bus. You will arrive back in Ho Chi Minh City at around 5:00 PM.

Its your last evening here, so let you hair down and go for a nightout before saying goodbye to Saigon!

We suggest you spend the last day in this amazing city by a visit to Mekong Delta. It will be a very memorable trip if you want to see the vietnamese countryside.

We started our journey quite early in the day around 7am for Mekong Delta. The drive was around 2 hours long with a short break planned at the Farmer's market mid way. Though it was a 10 minute stop, unfortunately our bus had a breakdown and hence we ended up spending close to an hour at the Farmer's market till an alternate coach arrived for us from the city.

It gave me an opportunity to try some fresh fruits and juices that tasted like heaven!

We drove past the green rice fields before arriving at the beautiful rural My Tho.

Our morning trip continued from here by motorized boat on the Tien River to the Qui (Tortoise Islet). On the way, see the fishing port, boat-building workshops, and the Dragon, Phoenix and Unicorn Islet.

You can walk into the village, where you can visit a local fruit garden and enjoy the tropical fruit while listening to Southern Vietnamese folk music performed by islanders. The hiney tea they serve is delicious. If you like honey, do buy a jar for yourself from here to support the locals.

Last but not the least is a must visit to the War Memorial.

The same shakes you up with pictorial stories of the Vietnam war, the sufferings, the pain. It showcases many aircrafts, tanks, ammunitions from the war left behind by the US army. The memorial is a must visit for all history lovers.

Ho Chi MInh, a city that come alive at night

A boat ride in the traditional row boat at Mekong

A traditional lunch of fish and accompaniments at the local Island

Buddha Statue lying down at the entrance of the temple

Sitting Buddha at the entrance of the temple

At the Framer's Market

Do you wanna buy some local utensils? I am selling

The Farmer's Market on the route to Mekong Delta

A poster showing the World's treaction on the Vietnam War

US Army Tank and Chopper at the War Museum

Control Room in the underground bunker at the President's Palace

The Tank 390 that crashed into the Palace Gate

An American Helicopter the wreck from Vietnam War

An attempt to fit in the Cu Chi Tunnel

A visit to Vinh Trang Pagoda was also included in our trip. Once you reach the temple. you see that  there are three enormous Buddha statues in the garden of this temple; one lying, one sitting and one staying.

You are also allowed to go inside the Temple (shoes and hats off) and I recommend going inside as there are beautiful wood carvings inside.

These golden words by Robin Williams's from the movie "Good morning, Vietnam" have kept me    awake many nights, echoing in my ears since i watched this movie around a decade back. Since then I had been dreaming to visit this beautiful country someday. Finally that day came and i sat in the plane to Vietnam explore and experience its landscape & rich heritage!

Ho Chi Minh city was the landing port for me from india and rightly so, it was this city that had kept me waiting  for all these years beacuse of its memorials of the world-wars and Vietnam war. Ho Chi Minh city (also know as Siagon) is the probably the most happening & popular city for travellers visiting Vietnam. Its The locals also flock here to enjoy the local delicacies as well as its nightlife.

Its the vibrancy of the city that catches your attention as soon as you step out to explore Siagon.

Travel Accessories that will come handy on your trip

Whats not to be missed at Ho Chi Minh City